The Prject „Paint Up Kin!“ was a three-mpnths long project with the support of the Swiss Embassy in Kinshasa. Each month, one large mural painting was created by the children of Oyo.Projects and children from the different local communities. The themes of the murals were chosen together with the children and want to refer directly to their life and future, spread positive ideas as well as inspire public discussions about the street children problematic. Art sessions were organized for the participating kids. At least 3 times a week they met in the cultural center ‚Bomoko Connexion‘ in Bandal. There, the kids had access to washing facilities for body and clothes, medicals and received a warm meal. Every day they had a drawing or painting session, games and discussions. In addition the kids were taught special artistic techniques that can be useful for a professional career and for handcraft jobs in drawing and painting.

The first mural was located directly in the neighbourhood where most of the prject’s participating children live. As most of them sleep under the bridge next to the “Institut Francais Kinshasa”, the mural’s location is part of their territory, of their everyday life. The Oyo team found the place perfect for having a direct, positive influence on the kids daily routine and for creating a platform of exchange between the local community and the street children, that are excluded from the community although they live in the same place. „Kitokolilo“ is a Lingala slang word, that is frequently used by street children. It is an enhancement of „Kitoko“, which means ‚great‘ in Lingala. Kitokolilo means ‚exaggeratedly great‘. As the Oyo team is often asked why they work with “les sans espoirs”, ‚the without hopes‘ as street children are called, we chose to transform the expression and give it a positive turn: instead of the ‚without hopes‘, they became the youth with hope, “Jeunesse avec espoir”. This transformation wants to change peoples’ view on street children in general and to encourage the children to think positive about themselves. 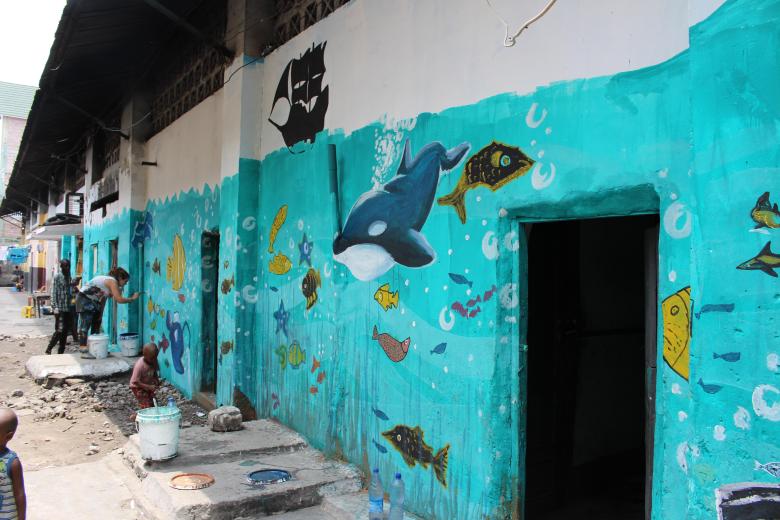 The second mural was realized on the walls of a big former storage hall from the colonial times. Today this hall is a squat, where over 1000 people live illegally. The hall is owned by the government, but as it hasn’t been used for 30 years, homeless families started to take over the place to live at. Locals calls the place „Kosovo“, as they imagine people in Kosovo living under comparable difficult conditions as themselves in the storage hall. We transformed ‚Kosovo‘ and gave it a new name: ‚The Ocean‘. The place became a colorful and vibrant underwater world, with fishes and other animals living in the water. The theme was inspired by locals saying that the number of people living in the hall is higher than the number of fishes living in the ocean.

The third mural was realised in Kintambo. „Lobi lobi Kuna“ means in the local language Lingala „the day after tomorrow“. The participants had been encouraged to think about the future and imagine a different world. The Chameleon represents the capacity of change. A young girl of the quartier was chosen as model to also empower girls and women to be a part of an active society and to stand up for their dreams.